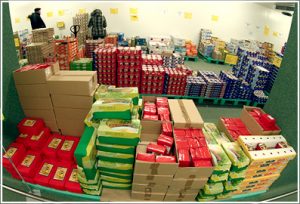 In 1997, rented a small car container at 41 Waryńskiego Street in Suwałki …. So begins the history of the PHU “PIKO”. The origins were not easy. But a year later, in the part of the Primary School in Raczki, it was possible to open a food store. Responding to the market demand we systematically enriched our offer and established cooperation with other suppliers.

Our experience and knowledge of the market resulted in adaptation of the product offer to the requirements of customers not only local market but also customers from Lithuania.

Less than four years after its founding, Hurtownia “PIKO has its own premises and 3 delivery vans adapted for transport of meat, fresh meat and poultry.

PHU “PIKO” focuses on development so every year we try to modernize our buildings and invest in improving the qualifications of our employees.

In order to meet the needs of the Lithuanian market, in 2006 we opened the “PIKO-KAUNAS” Meat and Smoked Meat Wholesale Trade in Kaunas.

In the same year, PHU “PIKO” ranked first in the ranking of small companies in the category of net income in the “TOP BUSINESS” Suwalski Businessmen’s Ranking. In 2009 “PIKO” company was honored to be in the Golden Hundreds of Podlasie companies.

Our actions were noticed by the authorities of the city of Suwałki. We have been honored with the prestigious “Jaćwingów Spaniel 2011” Award, for its dynamic development, creating new jobs, and actively promoting Suwalski sport and culture in the category of economic activities.

Since the beginning of our activities we have made every effort to organize, logistic, professional market service to provide you with the highest level of service.